I'm going to start off talking about one of my passions. I remember when I was a kid I went with my cousin to watch The Fast and the Furious in theaters. The movie was about street racing and import cars (Japanese cars to be more precise). It was my first introduction into the car scene and I absolutely loved it. From that point on, I was completely obsessed with cars, especially if they had a small engine and massive turbo. I quickly learned all I could about cars, enrolled in shop class at school, and spent all my free time going to car meets and underground street races.

The Godfather of all import cars (yes this is a fact, no it is not up for debate) is the Toyota Supra. The Supra is a special car. Toyota built the Supra with an inline 6-cylinder motor called the 2JZ. The 2JZ engine is one of the best creations to grace the car world in history. It didn't take long for people to start modifying the Supra and creating monster race cars. With just a few added parts and some tender love and care, a Supra could generate ridiculous amounts of power (we're talking over 1,000 horsepower) and beat almost any car on the road (or track). The Supra was my dream car. It was the background image on my computer, phone, and I had posters of the Supra up in my room. That's why, at the age of 23, fresh out of school and with my first big boy job, I decided to buy one. I spent more money on that car than I had ever spent on anything in my life. I dropped $50,000.00. Spent another $4,000 to get it registered and shipped from Florida to my apartment in Utah. I remember calling the truck driver every 6 hours or so to ask how much progress he'd made on the cross-country voyage. When the day finally arrived, I backed my dream car off of the semi truck and drove away into the sunset. 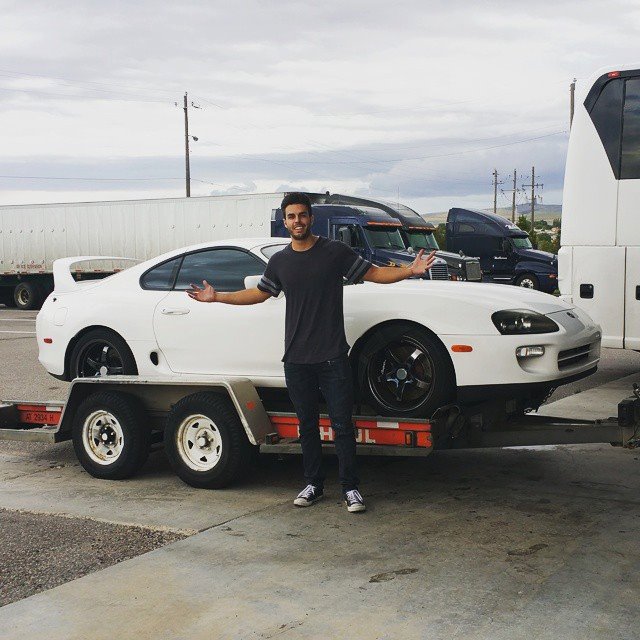 And then life changed.

I met the love of my life, moved from Utah to Idaho, started a new career, and the Supra sat in the garage. Don't get me wrong, I drove the car every now and then, but by this time I was a married man with different priorities. I truly didn't have time to go to car meets, I certainly wasn't going to street race, and I was running a business. I wasn't in a bad financial position by any means, but the fact that I had 50 G's sitting in my garage instead of my retirement account slowly began to bother me. I kept rationalizing with myself, "Jackson, you work hard. You deserve to have a fun car.", "Dude, if you don't have the car now, you will never have the car again", and my favorite, "it's a collectable car, you can sell it whenever you want."

The egotistical side of me that loved having what many people consider to be a dream car. Sure, it wasn't a Ferrari or a Koenigsegg, but it could beat almost everything on the streets. I owned it myself. I was proud.

Then I started thinking about the potential returns I could generate with that money. Assuming I kept the miles low on the Supra, I could realistically sell the car for $80,000 to $100,000 at some time in the future. That seems great to me. But the more I thought about it, the more I realized that it wasn't that simple. I had to pay licensing fees and insurance fees regularly. Because it's a race car, the insurance premium was expensive. $115.00/month to be exact. It costs about $200.00/year for licensing the car. So that's an additional $1,580.00/year just to own and protect the car. This is where the car lost its appeal to me.

The average annualized total return for the S&P 500 index over the past 90 years is 9.8%. Assuming my 50 G's could be invested into an S&P 500 index fund, and the additional $1,580.00/year that I would have paid to keep the car protected and licensed was also invested each year into the same fund, my investment could grow to $257,491.88 over the course of 15 years.

The numbers start to look really insane when you extend the "Years to grow" from 15 to 20.

Now, there is some obvious uncertainty in the markets. There very well could be a recession, a market crash, or some other problem with my investment strategy. The S&P 500 is an index that certainly has volatility.

However, the question I began to ask myself was this, "Will I ever be able to sell my car for more than what the S&P 500 will *likely* give me?" And then there's the immediate benefits of owning an index fund. Liquidity is a big one. What happens if there's an emergency and I need a lot of cash? A Supra is more difficult to sell than an S&P 500 ETF. What about protecting my car from disaster? What if I'm driving it and it breaks down? It is a car after all. What if I got into a crash? What if the car was stolen? What if my house burned down with the car in the garage? What if Supra's just aren't that cool in 15 years? I was beginning to understand the idea of "having all your eggs in one basket."

That's when I decided to sell the car. I put the car on eBay and within one week, the new buyer took the car back to his shop, on a trailer of course.

I put the cash in my investment accounts (funded a ROTH IRA (for me and my wife), put some in our SEP IRA, and actually had enough to plunk some cash into a 529 college savings account (now my kids get to go to college!). It's been in the market since. I actually set up automatic contributions each month ($132.00/month to equal my $1,580.00/year) that go directly into the investments as well. I won't know if I made the right decision for a while, but I feel very confident that I made a responsible choice. I don't really miss the car, which is the weird part. I think it has something to do with this:

Remember how my investment account, if the market does in the future what it's done in the past, has an estimated future value of $421,486.27?

I'm not writing this to discourage you from buying things that make you happy. Just carefully weigh the options and make sure you're putting your hard earned money in places that will really make your life better. For some, that answer is a car. For others, it's not. Be balanced and think in bigger chunks of time than a year or two.